A valuable experience in Xian (西安）

Posted by Unknown on April 22, 2013
I had to get the coach from the bus station to Guangzhou Baiyun Airport start my journey from Zhuhai to Xi´an. Then we caught a 2 hour flight to Xi´an which was very tranquil. Most of the time when we want to travel around China from the south, the airports with better flight connections are located in Guangzhou and Hong Kong.

Looking into the details, Xi´an is the capital of the Shaanxi province and one of the most oldest cities in China with more than 3000 years of history. Xi´an is one of the four great ancient capitals of China and home to the Terracotta Army. This site without any doubt also appears in the list of World Cultural Heritage Sites by Unesco.

Xi´an is a very old city where the most important and popular point of interest is obviously visiting the Terracotta Army. The museum where the army is situated is divided into 3 pits. 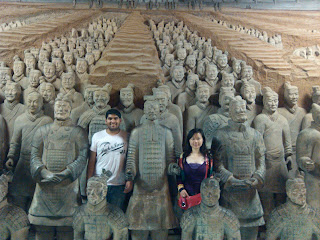 The first pit was discovered by local villagers in 1974 where they found many fragments of the terracotta warriors and many bronze weapons.

Pit No.2 is the most spectacular of the three pits. Compared to Pit No.1, the combat formations in Pit No.2 are more complex, and the units of armed forces are more complete. According to preliminary calculations, there are over 80 war chariots, about 1,300 terra cotta warriors and horses, and thousands of bronze weapons.

Pit 3 is the command center or headquarters for all the groups in the other two pits. The unearthed artifacts include 68 terracotta warriors, four horses and one chariot all arranged in a layout that is quite unique.


Many warriors and cultural experience to admire and contemplate within these three pits which is an unforgettable lifetime experience.