Posted by Unknown on April 12, 2012
We had arrived in during the national ‘tomb sweeping’ holiday and it appeared busier than ever! We managed to navigate our way through coach station and catch our coach for the 2 hour journey to Zhuhai. Driving into Zhuhai we were greeted by a beautiful coastline and as we spotted some of the 146 islands which made up the ‘Romantic’ city we could understand why it is known as one of ’s cleanest and prettiest cities.


We were met by some members of the InternChina team and then we were off to meet our host families who we would be living with for the next few weeks! 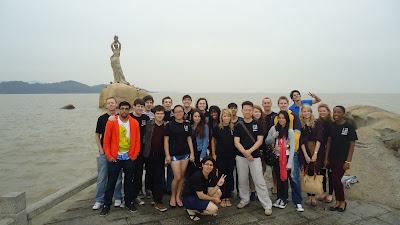 The taxi stopped outside a large secure complex and I realised we were here! The guards let us in and after walking past a few apartment blocks we arrived at the one I would be staying in. My family lived on the 14th floor and as I looked out of the window by the lift I could see greenery; very different from the view out of my window in , and very different to what I imagined of !

My host family were lovely and we managed to communicate with each other fairly effectively; albeit with the help of an English to Chinese app on our smart phones! We soon sat down for dinner and with my chop-sticks I tucked into dinner which looked like an absolute feast; I was soon to realise that this is what every meal time in is like! I was exhausted, my first couple of days in China had been non-stop and I needed to get some sleep. After all I had my first day of StudyChina school tomorrow!